You are at :Home»General Office»The Surprising History of Standing Desks 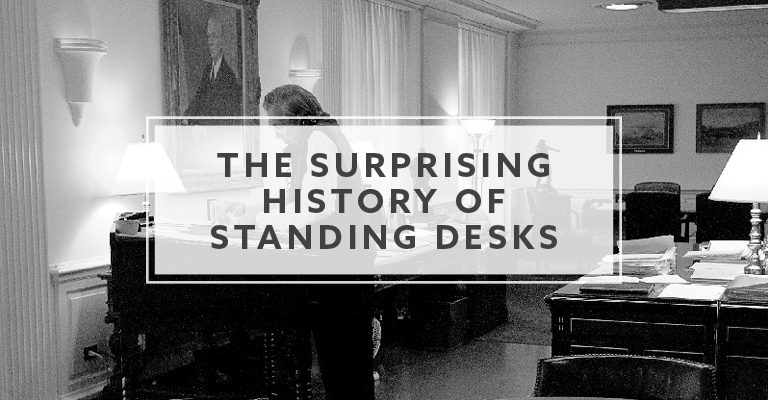 The Surprising History of Standing Desks

You may use a standing desk or probably know someone who does.  The ergonomic office furniture has become a popular choice because of reports that say standing more during the day could help fight off “sitting disease.” However, standing while working is not a new trend; in fact, the history of standing desks may surprise you.

When Were Standing Desks First Used?

Of course we may never know the exact time the first standing desk was ever used, but they can be traced all of the way back to the 1400’s! It’s been said Leonardo da Vinci painted the Mona Lisa while standing up at an easel and was using a standing desk when he came up with his many other ideas such as flying machines and the armored car.

While there were some early users, standing desks became more popular in the 18th and 19th centuries.  They could often be found in the homes and offices of the rich. The advice of an English dissenting minister in 1797 may have played a big part in the rise of this furniture.  Job Orton said, “A sedentary life may be injurious. It must therefore be your resolute care to keep your body as upright as possible when you read and write; never stoop your head nor bend your breast. To prevent this, you should get a standing desk.”

This type of suggestion carried on into the 19th century. A self-help book from 1858 suggested that professionals practice penmanship on their feet since nearly half of all business writing was done at standing desks. Inventors of the era filed patents for bureaus that could be adjusted with cranks.

As America has grown to be more industrialized, and machines have taken the place of many jobs, it has become more common for workers to sit all day. In fact, sedentary jobs in the U.S. have increased 83% since 1950, and only 20% of our workforce is now made up of physically active jobs. More research is being released to show that sitting for these long hours could actually be killing us by increasing our risk for high blood pressure, obesity, cardiovascular disease, and even cancer. This is why more and more people are reviving the idea of standing while working and the new “standing desk revolution” was born. 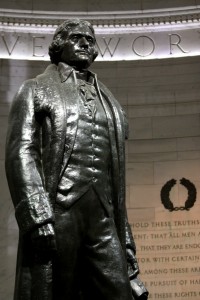 Probably the first prominent person in America to use a standing desk was Thomas Jefferson.  The author of the Declaration of Independence and our 3rd president ordered his desk from a Williamsburg cabinetmaker in the late 1700s. He designed his “tall desk” to have 6 peg legs for increased stability.  It featured a slanted top that could be adjusted with a ratchet stand, and was large enough for a folio.  It’s said that Jefferson used this desk to draw up famous architectural blueprints. 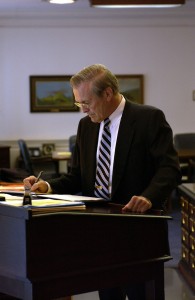 Donald Rumsfeld says Thomas Jefferson’s stand up desk is still in the State Department. The former Defense Secretary carried on the standing desk tradition by working without a chair in his office. After hearing that terrorism detainees were standing for 4 hours at a time, Rumsfeld responded, “I stand for 8 to 10 hours a day. Why is standing limited to four hours?” A spokeswoman says Rumsfeld stood all day, except when he had lunch with other people. 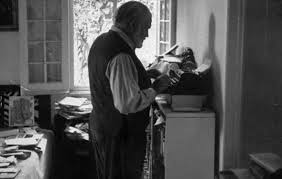 Nobel Prize winning novelist Ernest Hemingway was an avid stander. In an interview published in the Paris Review, the interviewer described Hemingway’s behavior: “A working habit he has had from the beginning, Hemingway stands when he writes. He stands in a pair of his over-sized loafers on the worn skin of a Lesser kudu—the typewriter and the reading board chest-high opposite him.” It is said he started standing while writing because of a minor leg injury he got in World War I, and learned the standing desk method from one of his editors.

Well-loved author Charles Dickens also used a standing desk. A visitor to his study once described the space: “books all round, up to the ceiling and down to the ground; a standing desk at which he writes; and all manner of comfortable easy chairs.” 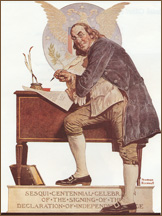 One of the founding fathers of the Unites States, Benjamin Franklin, was fond of standing desks too, and even has furniture named after him to this day.

And one of the world’s greatest wartime leaders of the 20th century, Sir Winston Churchill was also known to use a standing desk in his home office. He must have been doing things right; the former British prime minister lived to be 90 years old.

Donald Rumsfeld isn’t the only standing desk aficionado around today.  Officials at Facebook say a number of their employees asked about standing desks after news articles were published about the health risks of sitting all day. They said they saw a jump in requests for standing desks, ranging from five to eight a week. The latest research shows there are now more than 350 standing desks at the Palo Alto, California employer. Facebook was also trying out a treadmill station which allowed workers to walk or run while on their computers.

Meanwhile, a Google spokesman says many employees there opt for standing desks, which they offer as a part of their wellness program.  It is not known exactly how many of their employees use them.

Kate White, a former editor-in-chief at Cosmo says she likes to write while standing in the kitchen. “My craziest trick is that I regularly do my work standing up at a rolling butcher block counter in my kitchen. If I were to work sitting down, I’d fall asleep,”

And Here at Beyond The Office Door, our long list of customers includes:  Boeing, HP®, A T &T, Vanderbilt University, and the U.S. Forest Service.

While in the past standing desks may have been catered more to the wealthy or the eccentric, today’s adjustable standing desks are basically available to anyone who wants one. There are a variety of options on the market to fit the needs and budgets of work and home offices, and they are likely a lot easier to use. The factor that has remained the same, though, is the health benefit standing desks provide, which will likely carry this ergonomic furniture trend well into the future.

Did any of these standing desk users surprise you? Do you have any good history stories about standing desks that you would like to share?   What keeps you using your standing desk?  Let us know in the comments!

WobbleMeter Results: How Stable Are The Most Popular Standing Desks? 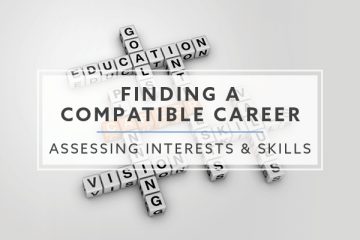 Finding A Compatible Career: Assessing Your Interests and Skills 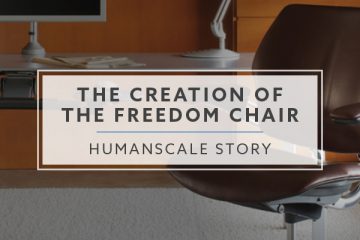 Humanscale Story: The Creation of the Freedom Chair 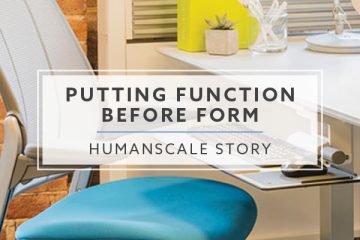 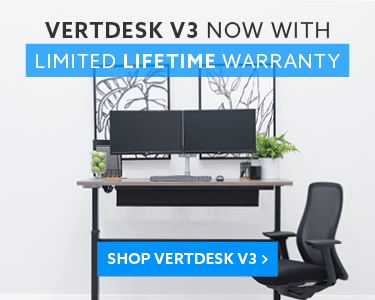